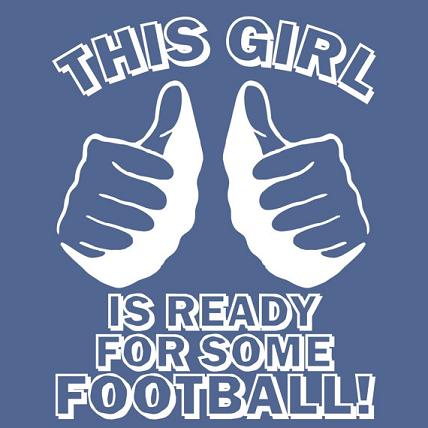 Super Bowl XLVII is on Sunday, February 3rd between the Ravens and the 49ers. (Also known as the Harbaugh Bowl)

Join me, as I host the

This is going to be one helluva night- drink specials, deals on food, and even the Bud Light girls. I may challenge you to some NFL Trivia, but don’t worry… I’ll take it easy on you. I don’t bite… all the time.

Who knows? Maybe you’ll even meet your future ex-wife!

Tables are already being reserved, so make sure you book well in advance! If you wait until John Madden tells you who his heartburn care sponsor is, you’re too late! 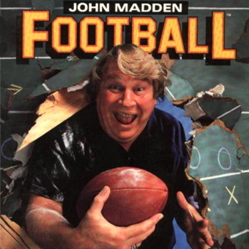 If you want to reserve your table with me, you can do it one of two ways… 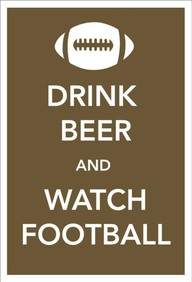 Congratulations, Scott Kwasnecha, our latest Elite Sportswear Coach of the Week. Below is the nomination email we received from Ryan. 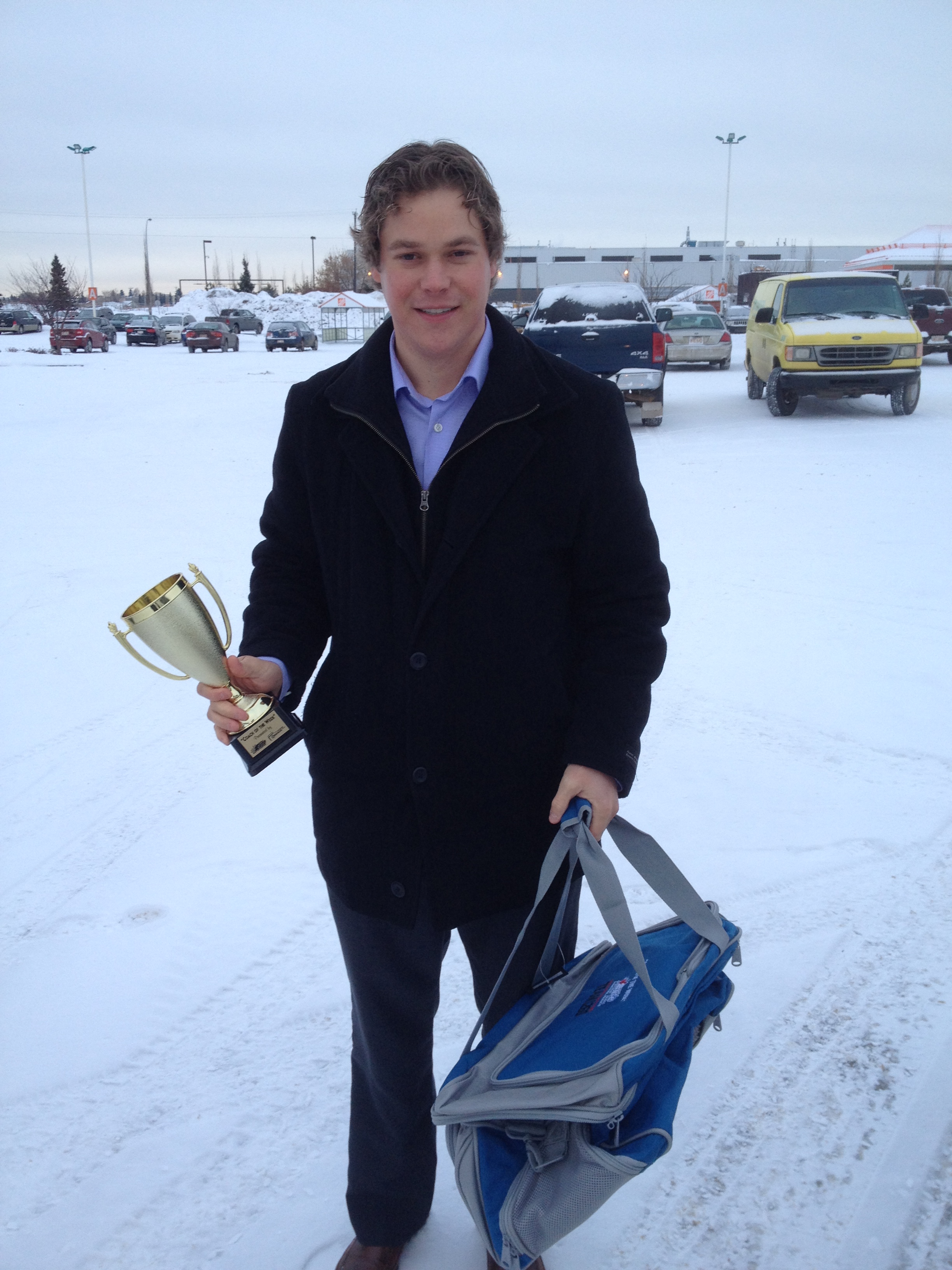 It’s a pleasure for me to introduce to you our manager Scott Kwasnecha, for his efforts in making our season a special one thus far.
After coaching for the past 10 years and having an abundance of success at the AAA level here in the Edmonton area Scotty jumped on board as our manager for the Leduc Minor Midget AAA Oil Kings. Scotty was a part of the Midget AAA South Side Athletic Club that won the Macs cup in 2010, the first time a Edmonton team has done so. He followed that up coaching alongside me the following year and most recently moved into the manager position this season.
A volunteer that has a passion for the game and approaches every task with a purpose in mind. I’m extremely lucky to have an organized manager that takes care of a lot of the behind the scenes stuff, itinerary, planning, daily emails and dealing with the always interesting parent phone calls.
For a guy that just tied the knot, who doesn’t have a child on the team, and that is extremely career orientated, I can’t say enough about the time and dedication he’s put forth to make this year’s experience as enjoyable as possible for everyone involved. He’s a 29 year old that can’t get enough hockey and loves giving back in the community, specifically donating money from his business to help with our club. You won’t find a guy that deserves this more than Scotty!

Thanks for your time.

Congratulations Shane Boulerice, our latest Elite Sportswear Coach of the Week. Below is the email we received from Glenn, telling us why Shane was so deserving of this award. 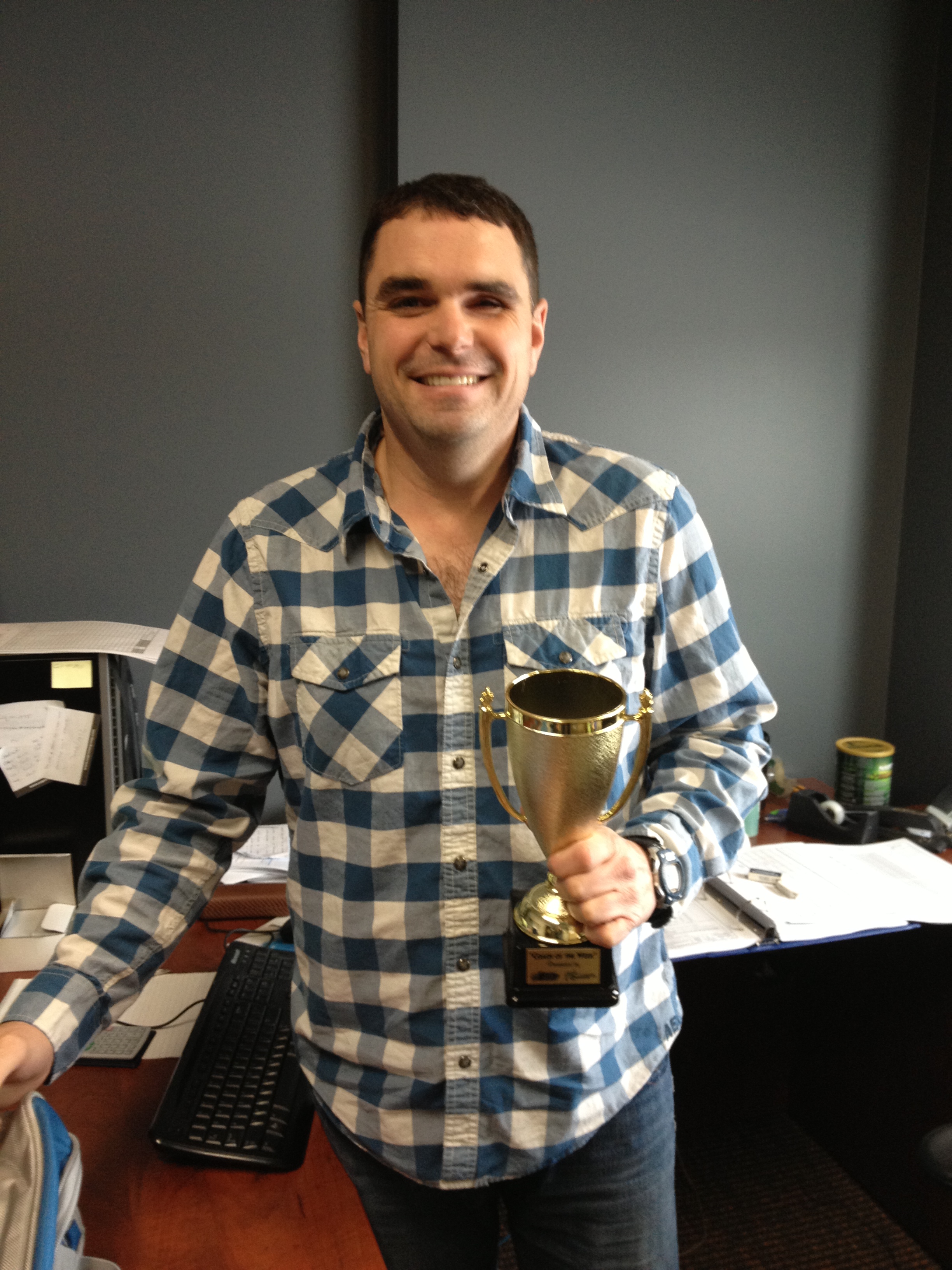 I have to put Shane Boulerice and his coaching staff up for Coach of the Week. He is the coach of the Westlock Peewee Warriors, they play in tier 2A- that’s 1 up from A 1 down from AA. When we started, they picked 12 kids and a goalie. They started off 0-3-2, but Shane kept positive and kept teaching the kids skills, passing, shooting, and skating. They went into break outs and forecheck (no systems just be hard on the puck).
They are now 3rd at 4-4-2 with a chance to move into 2nd place. Needless to say, he has got a lot out of the kids. From the games I’ve watched, there’s no doubt they will end up 2nd in their tier, and it’s all because the kids love their coaches and what he has taught them. He puts in an endless amount of time and treats every kids with respect. He is why minor hockey is a great thing for kids.

Congratulations, Mark Brown, our latest Elite Sportswear Coach of the Week – and first of 2013.

Below is the email we received from Terri, telling us why Mark was so deserving of this award. 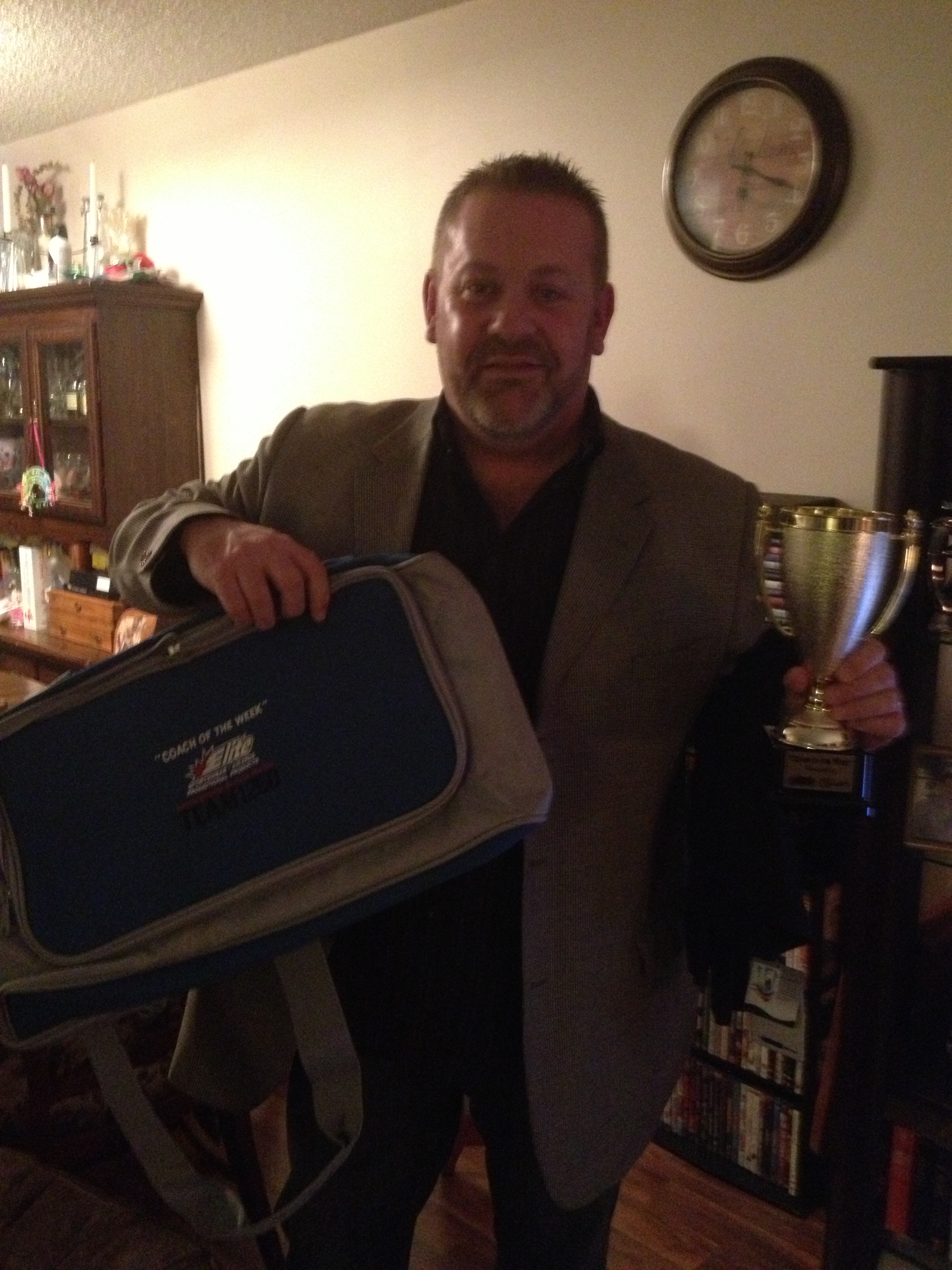 Jason,
I caught your show last week as my husband always leaves your station tuned in when he borrows my van for Hockey on the weekends…

When I heard you talking about nominating a Coach of the week I thought I just had to share his story…I warn you now he is a very modest person but I just feel with the amount of commitment he puts into the community it would be nice to see him receive some recognition:

I would like to nominate Mark Brown who currently coaches our initiation2 team…
Mark has been coaching for 20+ years in Minor Hockey between Ontario and Alberta…In addition to coaching Mark is currently the President of Millwood’s Hockey Association, and has been actively serving the board for 7 years.
For the last 2 seasons Mark has coached 2 teams each year but made a promise to our 5 year old Daughter Gracie that he would devote his coaching time to her this season. To give you an idea of Marks style Marks Rule before any of the kids leave the dressing room they must be smiling, and the commitment he makes to the parents is that they will come off the ice with a smile! Believe me he certainly holds up his end!
In addition to being the Coach Mark plays Santa for all the Kids every year for the team Christmas parties which he offers his time to not only his team but all others in the program. There is one more thing I would like to share which is that Mark is the Founder of “Shoot for Food” which is a foundation he started 3.5 years ago. Shoot for Food is an exhibition game that takes place in December at Millwood’s Arena which involves 2 teams Millwood’s VS (TBD this Year). Each player will do their best to get Monetary donations and as well Non-perishable foods to support the Edmonton Food bank! They have done extremely well every year!
The night of the game is an absolute blast as Mark gives the kids the big league experience by lining both teams up on the blue lines and plays Oh Canada, music between periods (Loud)…In the end the players get to be involved in something that they can take with them for the rest of their lives which every parent that has been involved believes is pretty special…(Helping those in need in your community)
Each player receives a Certificate recognizing theirs efforts from the EFB.
The Local News has been to the game 2 times which is always nice to also give the Foundation some air play! I know even if he wasn’t selected as Coach of the week Mark would be happy with just a plug for Shoot For Food being held at Millwood’s Arena Dec 17/2012.
So as you can see Mark is a pretty remarkable guy who goes above and beyond…He simply loves helping people!
Both My Daughters Kaitlynn and Gracie are very proud of him and love him very much…

Thanks for Taking the time to read my email…