Congratulations Joe Marchese, our latest Elite Sportswear Coach of the Week. Below is the email we received from Heidi, nominating Joe for this award. 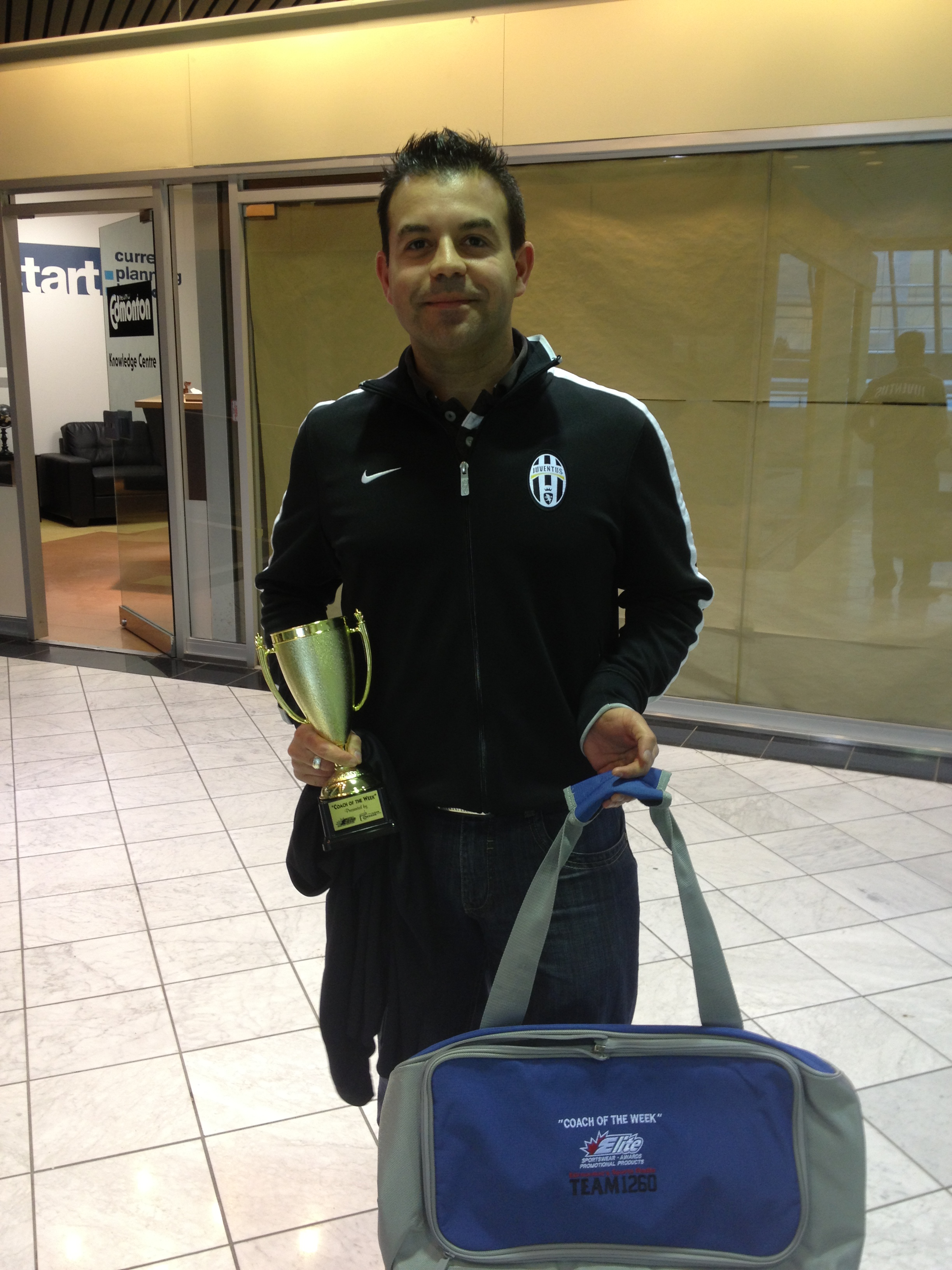 I would really like to nominate my son’s soccer coach for Baturyn U-8 Community, Joe Marchese. He is an amazing soccer coach! Not everyone can work with kids on a U-8 team (all boys for that matter) and get them to thrive at the game the way he does. He just knows how to make each kid feel special and excel in their position. Always pointing out the positive and getting the kids to work together and use new learnt skills in their plays on the field.
I would really like to see this man acknowledged for his wonderful kid skills and efforts to make each game such a great experience for each child.
Thank you so much for your time in reading this.

And Coach Joe really wanted to thank his kids for being so great…here’s the list of them:
2 Matteo
3 Mason
4 Andrew
5 Jacob
6 Joshua
7 Daniel
8 Francesco
9 Ahmed
10 Milano
11 Matias
12 Luca
13 Tyson

Congratulations, Ian McFatridge, our latest Elite Sportswear Coach of the Week. Below is the email we received from Erin, telling us why Ian was so deserving of this award. 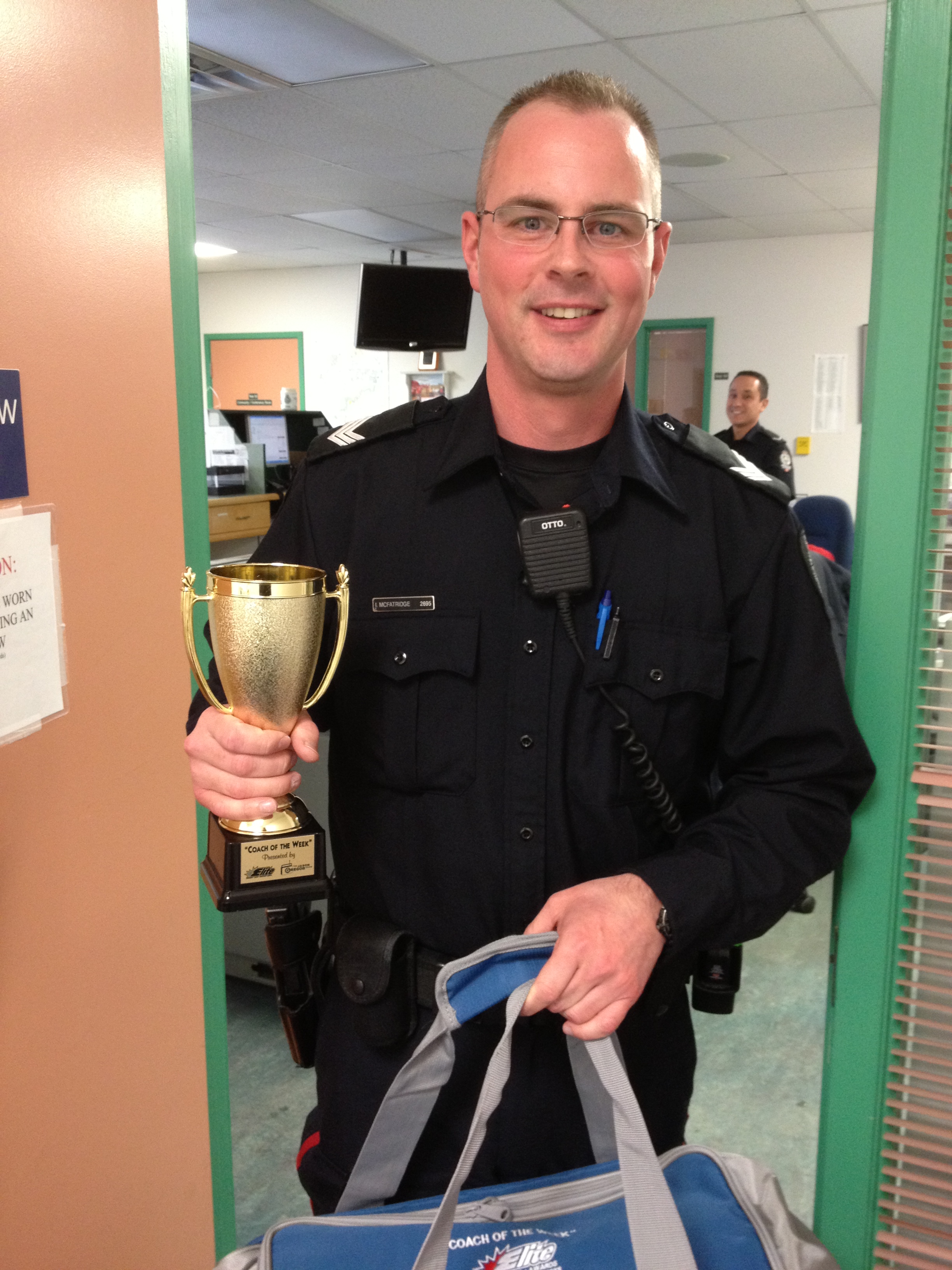 My son, Mathieu, has been blessed with tremendous coaches in his four years of hockey. He’s now playing Tier 1 Novice in St. Albert and loves the game passionately. Much of that enjoyment is innate but at least part of it has to do with someone who’s been a constant presence. Ian McFatridge is an Edmonton Police Services member. He was Matty’s coach during two years of Initiation and has stayed involved through extra practices and ice times since then. Ian’s become a very good friend, in large measure because of his being a rock-solid human being. In terms of coaching, he’s remarkable. His two sons and daughter play Atom, Novice, and Initiation, respectively. His oldest, Dylan, is on one of our AA teams and is a terrific player. Ian coaches or actively helps with all three teams. He also organizes extra ice times every week during the summer, and is part of a group of coaching dads who run an August camp through an organisation called Saint Albert Youth Sports Academy. All of this in addition to shift work as a cop. What’s truly extraordinary is that he shows up to practice with a lesson plan—and I mean every single practice that he runs. Furthermore, it’s tailored to meet the needs of all the kids with no one’s being left out, no matter what the skill level. And, just to top it all off, he’s great with the players, mixing strictness with fun and kindness in equal measure. I’ll tell you flat out that my son loves him and actually wanted to play down in Tier 3 to have him as a coach but Ian said that was a bad idea.

Anyway, if you need more testimonials, I know a bunch of parents who would vouch for Ian’s excellence and commitment, in addition to all the sacrifices he makes. Can’t count the number of times he’s shown up on a Sunday morning after driving his patrol car all night and he’s always in a great mood.

Thanks for the opportunity to promote Ian.

Congratulations, Jeremy Latta, our latest Elite Sportswear Coach of the Week. Below is the email we received from Darryl, telling us why Jeremy deserved to be recognized. 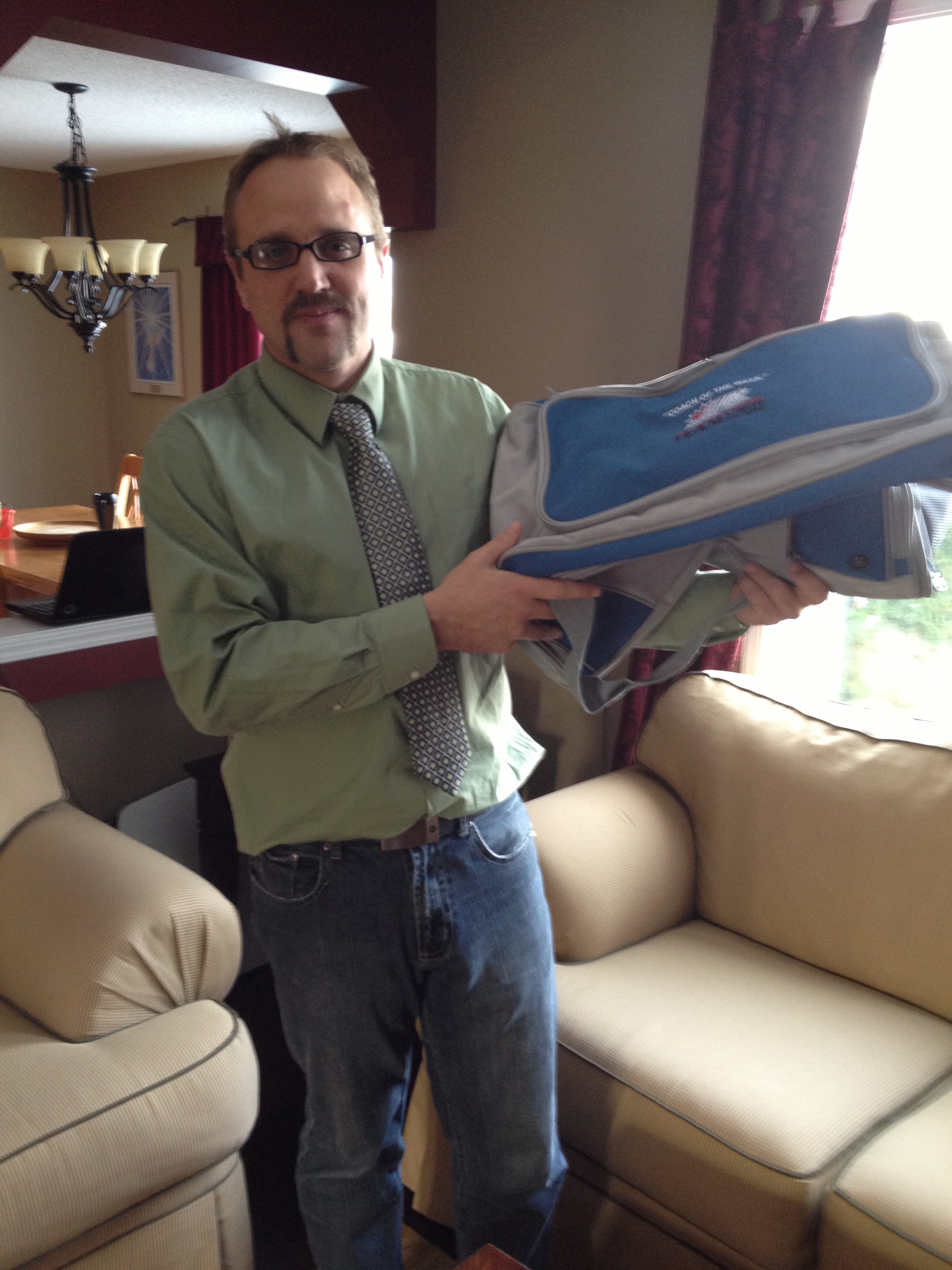 ‘m a big fan of the Team 1260, and the coach I am nominatin…g is an even bigger fan.
I would like to nominate Jeremy Latta for the coach of the week. He coaches the Stony Plain Strikers 14 & under indoor soccer team. He also coaches the outdoor soccer club in the summer. He is so great with the kids because he has lots of fun, while bringing out the best in the kids play & attitudes.
Jeremy has lead our small town team to the city finals twice, with one championship. He installs confidence and fair play values, and he exudes enthusiasm every game and practice. Please consider this nomination because it was well deserved. 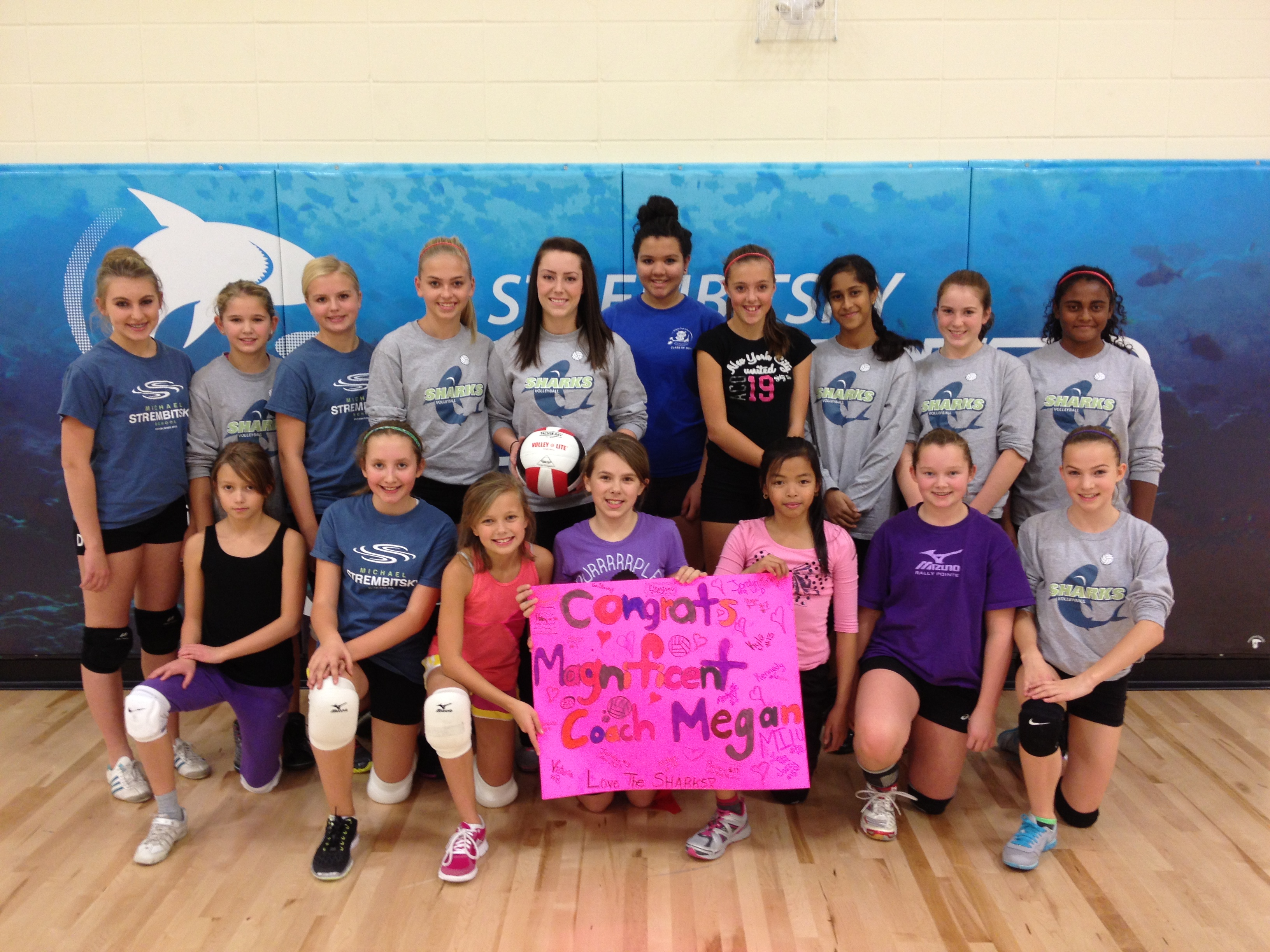 I would like to nominate Coach Megan Marris.
Megan voluntee…red to coach the first ever girls volleyball team at Michael Strembitsky School. Because the school was new, she took on 16 girls from grades 6-8 and has worked to tirelessly not only to build a team from the ground up but to teach skills to girls who had never before played the sport.
With Megan’s guidance and dedication, the girls have won almost every game this season and even though they were a junior team, were able to compete against senior teams in tournaments and hold their own. Megan herself is a student but she makes time every week to come to our school to work with the girls. Before every game, the girls form a circle in the middle of the court, wearing the green and blue socks Megan got them before their first game and set goals for the game. They could not have grown this much as players or as a team without her.

Congratulations, Therese “Trez” Robitaille, our latest Elite Sportswear Coach of the Week. Below is the email we received from Amanda, telling us why Trez was so deserving of this award. 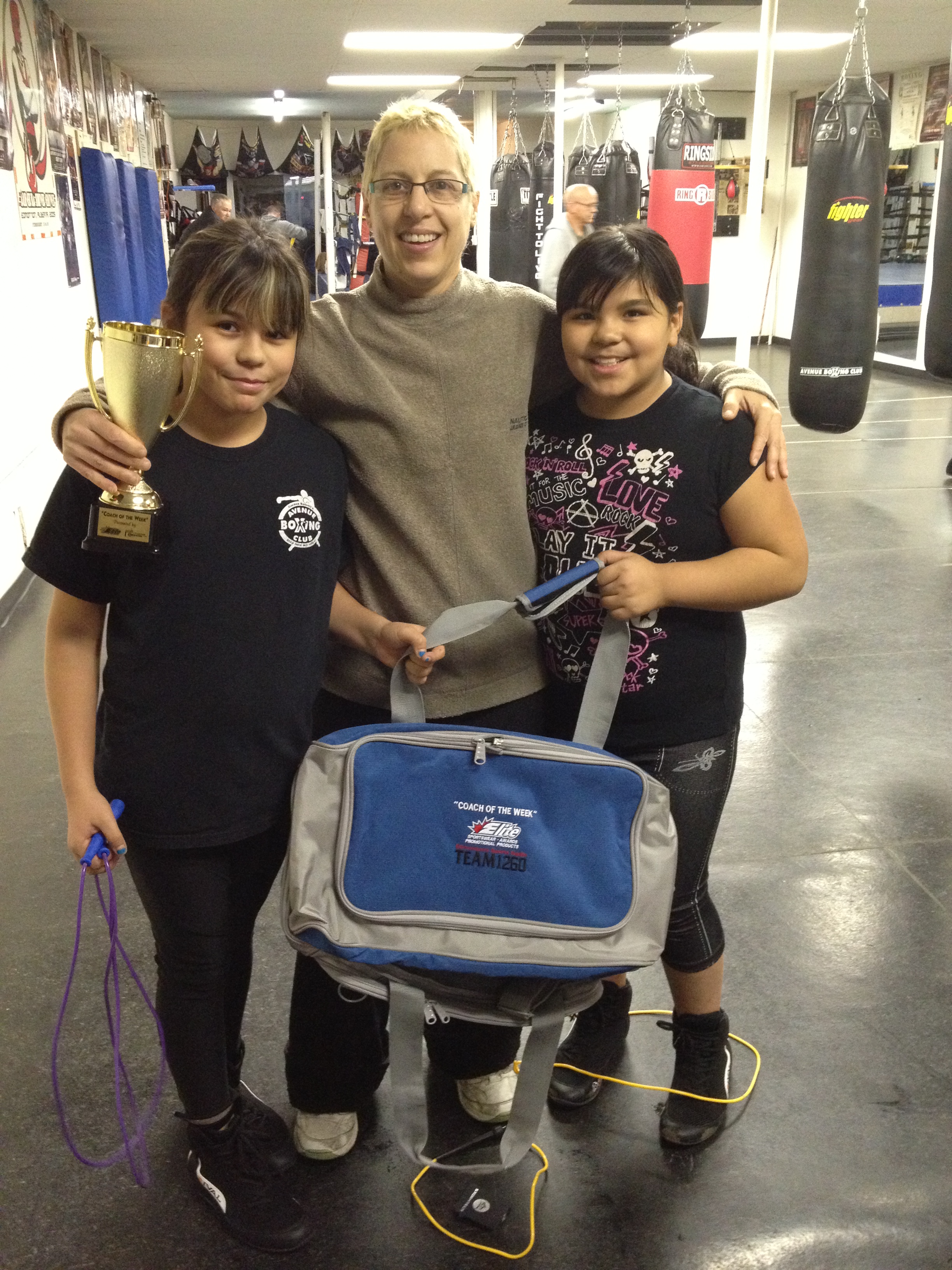 Trez was the first female amateur boxer in Canada.
Trez has such patience with my girls and volunteers her time at avenue boxing. Her normal 9-5 job she takes care of disabled people. She is such an inspiration to my girls and to me to be a better mom she has taught me to be motivated when it comes to sports with my girls as well as the importance of supporting them by being at every practise as I am.